Thanks to the Tucson Bus Riders Union there will be no fare increase, but the City is looking at other ways to balance their budget on the backs of poor bus riders. In order to keep our city’s transit system strong the City must increase ridership. That means that they can’t cut routes or reduce service because doing so would decrease ridership.

Right now the City is considering cutting, or reducing service to about a dozen or so routes, so we, the BRU, are on those routes informing riders of the changes and signing them up for the union. In short we are organizing! 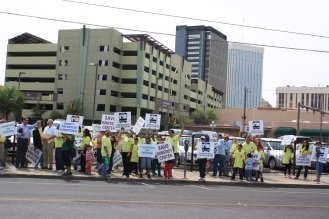 BRU Membership Campaign Team member Jim Thomas and I spent over three hours on route #6 on Monday. Jim spoke to dozens of riders who showed “a lot of concern” regarding the proposed route changes.

What we found was that most riders had no idea that the City was considering the proposed cuts. Out of the nearly forty riders I spoke with only one had knowledge of the route changes, and he was more than upset by it. The proposed changes to this route would not only increase his travel time, but also make him get off the bus and transfer at Ronstadt. As the route runs now he is able to take one bus from home to work and get there on time. If the changes take effect then he will have to leave an hour earlier then he does now in order to make it to work on time.

Since most riders were unaware of the proposed changes I spent a lot of time explaining them to people. Some riders blew me off and were not interested in speaking with me until I would explain the changes to someone sitting nearby, and after catching an ear-full the questions would begin. It wouldn’t take long for them to show interest in the BRU and ask, “so how do I join?”

The fact that bus riders are the last to know about changes to a system that directly effects them and their livelihood is a great indicator of how well Sun Tran and the City of Tucson reach out to the community to make sure there is equity and transparency.

The BRU team will continue to organize and inform riders of the City’s plans for the future of our transit system to make sure there is true transparency and that our elected officials are held accountable for their actions.

Bus riders and supporters be ready for a call to action in early May. STAY TUNED!