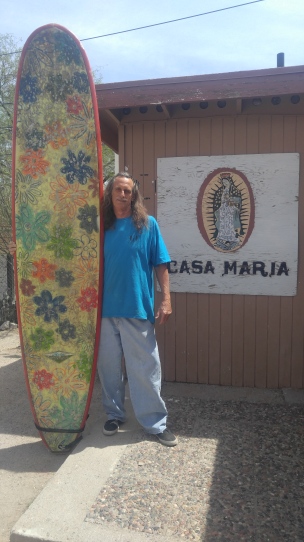 As a white guy who grew up in the suburbs of Los Angeles I always figured I had no real culture, I never even hung out at the mall or none of that stuff.

But I did grow up surfing San Onofre with my dad and all my little surf-rat friends.

And just last week I surfed both San O and the Huntington Beach Cliffs (5 minutes from my mom’s house!) and the waves were hot! And I actually got a few pretty good rides! No, really!

Corky Carroll, a So Cal surf idol from my youth to the present day, actually has a surf column in the Orange County Register. My 93 year old mother saves them for me.

After reading this one I realized that, sadly, this is my culture, learning to lie about waves…

If this is not a tradition, it should be: Anytime you get a sizeable injury, preferably one 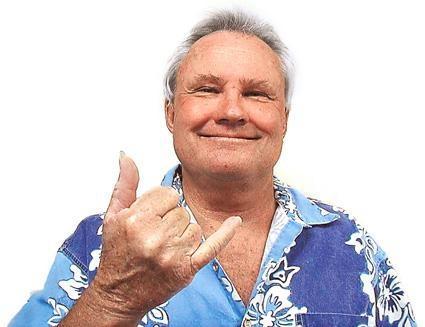 that leaves a large and lasting scar, there should be some sort of glorious story that immortalizes the incident in a fantastic and awe-inspiring fashion.

This is especially true with surfing because it is an activity that just begs for wonderfully exaggerated stories. In fact, even on the grass-roots level, surfing is, always has been and always will be, literally teeming with them.

Stories not pumped up a bit with a artistic license, or spicing if you will, are rarely all that interesting. Stories need color the way a soup needs salt and pepper.

So today I thought we would take a look at the embellishment issue. The story of what happened versus what really happened.

The basic example of this is the classic, and we have all heard this a zillion times, “You should have seen my ride today” tale. This normally goes something like, “I took off on this gnarly bomb and got triple barreled, popped a major air and never got my hair wet.” But what really happened was the dude took off on a close out and the wave broke on his head, knocking him off his board. And while falling, he farted and still has sand in his hair as he is telling the story.

Then there is the ever-popular size embellishment. (O.K. shut up, I am talking about waves here.) It’s the, “We went to Trestles today and all of a sudden these monster 20-foot sets started rolling through, it was corduroy to the horizon.” When in fact what really took place was they went to San Onofre where it was three feet and they were looking up the beach toward “Trestles,” making up stories about fictitious 20-foot days.

Now, to the point of today’s wandering. What brings this up is that I have a friend visiting me who got hit in the head with a board the other day and wound up with a big gash that required a bunch of stitches. Looks kinda like Frankenstein with a big zipper across his forehead. I was telling him he needed a good glory story to go along with the obvious scar that he is gonna have. So we set out to create one.

How do you do that, you ask? Well, first off a good glory story must have the right ingredients. We needed a huge wave, dangerous stuff like rocks and reefs, sexy stuff like a hot chick in some sort of state of undress, hero activity like coming to save the day and, of course, beer. With that in mind here is what we came up with.

“I was screaming along deep in the cavernous barrel of this triple overhead sucking-out beast of a wave when this hot lookin’ babe in a thong bikini dropped in on me. When she saw me behind her, in my perfect Gerry Lopez “in the tube” pose, she panicked and jumped off her board, which flew through the air like a Zulu spear and nailed me in the head. I had to straighten out and got drug across the razor-sharp reef and rammed into the rocks.

“As I was recovering and licking my wounds, I saw that she was stuck in the rip and looked to be in big trouble, so I swam out and rescued her. While I was swimming her to the beach, she started kissing me and along the way somehow her top came off. Now we are dating and her dad owns a bar and is so happy that I saved his daughter that he is giving me free beer for life.”

Of course what really happened was that he dropped in on some gnarly angry surf chick on a 2-foot wave and she kicked her board at him, nailing him in the head. As he lay in the water bleeding she paddled away calling him rude and nasty names.

Considering the size of the wound and the circumstances, I think we nailed the story pretty well, don’t ya think?

3 thoughts on “HEY I REALLY DO HAVE CULTURE! // ¡OYE RAZA, NO MENTIRA, TENGO CULTURA TAMBIÉN!”