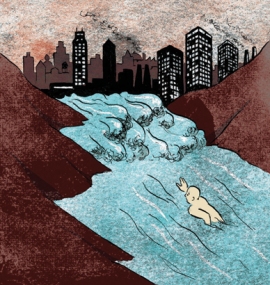 The Coronavirus outbreak has exposed many flaws not only in our governmental and economic structures, but also in our societal structures and the way in which people interact with and react to the world. I have recently seen posts and tweets circulating social media claiming that the minor but noticeable improvements in the environment as evidence that “we are the virus”. This is an ecofscist narrative that perpetuates a toxic environmentalist perspective, minimizing the value of human lives for the sake of protecting the Earth’s ecosystems.

This ideology is not new and historically comes hand in hand with xenophobia and genocidic ideologies. Dating back to 1798, Malthusians believed that while the Earth’s population grows exponentially, the Earth’s resources and food supply only increase linearly, ultimately leading to shortages. Neo Malthusians and many white environmentalists in the 1960s and 70s used these false narratives to villainize African and Asian countries for being “overpopulated” despite the fact that the U.S. and other western countries consume more resources and pollute the environment significantly more.

Instead of wrongly placing the blame on the nonwestern world and people of color, we must expose the negative effects of capitalism not only on the environment, but also on our social, political, and economic aspects of our society. The fixation with cheap and fast production of goods has led to chemical pollutants in water, increased carbon and methane emissions, inhumane treatment of workers overseas and domestically, and so much more. Overproduction creates far more of a negative impact on the Earth and its people than our inherent existence. Capitalism is the virus.

One thought on “Corona Virus and the Dangers of Ecofacism”